79% of Australians think it is acceptable for the government to work with telecommunication companies to track who has been in contact with people who have tested positive to COVID-19. If an option is added for people to opt-out of tracking, 92% support this strategy.

There are several ways in which contact tracing technologies could be implemented with different implications for effectiveness and people’s privacy. To assess the Australian public’s perspective, we surveyed 1000 people balanced to match the populace on gender, age, and state of residence. Participants were presented with one of two scenarios.

In the first scenario, only people who downloaded a government app and agreed to be tracked and contacted would be included in the project and data would only be used to contact those who might have been exposed to COVID-19.

In the second scenario, all people using a mobile phone would have their location tracked, with no possibility to opt-out. The Australian Government would use the data to contact trace and to locate people who were violating lockdown orders and enforce them with fines and arrests where necessary.

We then asked a series of questions designed to assess participants’ attitudes about COVID-19 and their sensitivity to the privacy issues involved in tracking. When polled a second time 67% said they would download the app, while 75% of those who received the second scenario now endorsed the policy. Being sensitized to the privacy dimensions of the scenarios decreased the willingness of people to adopt the policies, although not to a large extent.

If people who saw scenario one indicated they would not download the app, we asked if they would change their decision if their data was stored locally on their phones rather than in a central repository. Now 81% said they would. If a sunset clause of six months was added 76% said they would.

If people who saw scenario two were not willing to accept the policy, we asked if allowing people to opt-out of the tracking would change their decision. Now 92% would support the policy. If a sunset clause was added 88% supported the policy.

We are running the same survey in multiple countries. The figure shows the percentage of people who indicated they would download an app (green) and who found tracking through telecommunications companies acceptable (purple) in the countries that have completed data collection so far.

Australians rated working through telecommunications companies (scenario two) more likely to reduce the spread of COVID19 and more likely to allow them to resume their normal lives more rapidly than downloading an app on a voluntary basis (scenario one), perhaps because this option is likely to achieve a greater coverage of the population. This difference did not arise in other countries and may explain why Australians find working with telecommunications companies more acceptable than their counterparts in other western countries. 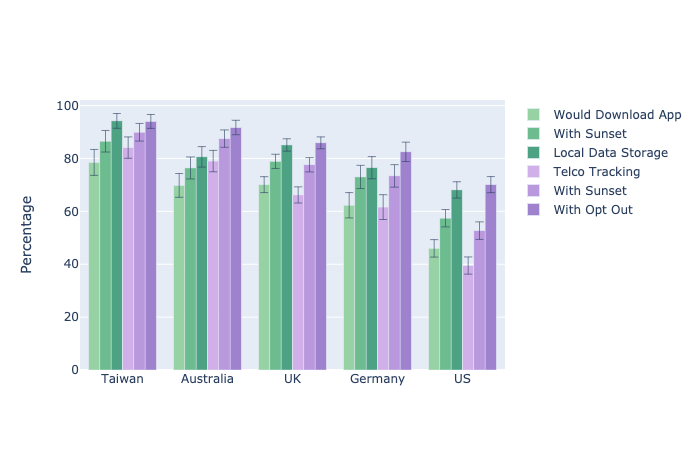 We intend to run an additional three waves of the study to track people’s opinions across time. In the next wave, we will introduce a third scenario that describes the solution that Apple and Google have proposed. This option includes stronger privacy protections, but would be more ubiquitous than a voluntary app download and therefore may be viewed differently by Australians.

More details of our preliminary analyses can be found at https://bit.ly/2XsNuOQ.

Director of the Complex Human Data Hub in the Melbourne School of Psychological Sciences. CEO of Unforgettable Research Services. View all posts by Simon Dennis